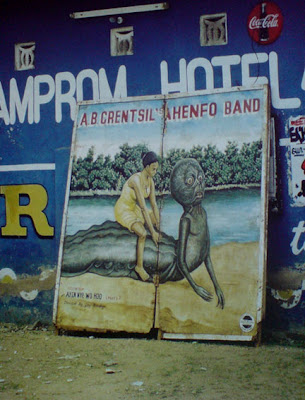 Announcement billboard of a concert by A.B. Crentsil placed on the streets, painted by Mark Anthony.

Ehuru Huru A Ebetwo (no situation is permanent)
In general we can say that Highlife tells about common problems of life and deal with a wide variety of subjects, urban aswell rural, modern as traditional, true events but also fables.
The guitar Highlife dancebands were very popular in 70's Ghana and had a big influence on the society. A concert of Highlife bands usually started with a theatre play around a certain theme before the bands performance. It seems that at first urban life and social mobility were the predominant themes in Highlife songs. It reflected the high society in towns. In that early period Highlife probably played a modernizing role by connecting these new problems by refering to the older wishdom and tales. Like the early troubadour traveling from town to town telling news, tales and wishdom accompanied by music or the elders sitting under the tree teaching the young, storytelling is actually the main aspect of Highlife. Daily problems that are recognised by people and tell how they could cope with them. Old wishdom is updated and again spread by the songs and records. Oneliners from the lyrics are picked up and used in daily language, written down on houses and cars (transport vans) in the streets.
Highlife originated at the end of the 19th century at the Ghana coastal area and could then still be seperated in two different styles. The horn orchestras that played in the decent ballrooms and the guitarbands that toured the workers bars. These guitar orientated dancebands played less the western influenced popular tunes as their music was more African rhythm driven and about the struggle of daily life. In the 50's danceband period, Highlife became very popular over the whole south of Ghana and parts of Nigeria. The electric guitar became the most prominent instrument and by its 70's toppingtime it is spread all over Ghana, Nigeria, Sierra Leone and also Congo.
Highlife comes in various forms, influenced by many other styles of music and usually with its own genre name and dances. What i bring you here is very up-up tempo Highlife stuff, rhythmical drum changes accompanied by freaky organs and great guitars and great voices. These are long tracks so i can imagine your short-attention span starts to speak when listnin to this for the first time, but i assure you it grows on you.
I do not understand the lyrics, but for example the first track by Alex Konadu - Adamfo Pa [Good Friend], it expresses the sorrows of someone who has lost a very good friend. That person becomes confused and start to behave real strange by his extreme sadness about the death.
After the first hour i'd slow it down with some great classics by Vis-a-Vis band and for the endpiece i let you hear a some copper by Asiakwa Brass Band who had a very own style as you will hear. Let me know if you like and i am looking forward to bring you more of this band, or other wicked tunes ..
nuff said, enjoy here [refresh 14022011]

Hi there! Looks like we share a bit more than just an avatar... I just came to this fantastic mix. Pure energy!!! Incredibly enjoyable selection, thanks a lot.

dailyleftover
let me know if links died-out and i will re-up them for your personal pleasure ~ enjoy! USE ARCHIVE DROPDOWN FOR SEARCH GOLD ⏎