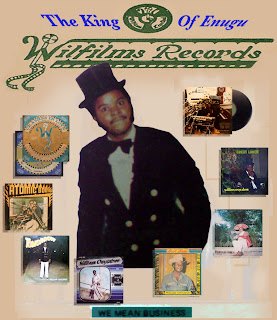 hi there suckers! I dont have much to mention here, as you probably know whats up here. A tribute to the man from Enugu, Nigeria.
The name Enugu comes from the two Igbo words enu Ugwu, or Top of the hill. Known for many things but for us only counts a place that spawned some serious synth records as it was also the place of Goddy Oku's Godiac Studio. In companionship of a collection of synths like Moog and Elka, William Onyeabor created from end 70's a rare collection of tracks on his own Wilfims label that is unlike anything else coming from Africa or even the whole world at that time. Under the influence of plunky spacy lo-fi funk and some fine (never credited) female vocals William Onyeabor gave fans his moral advice and wisdom for a better tomorrow that never came.

Today Chief Onyeabor still lives in Enugu picking the keys once ina while for the love of god and still for a better tomorrow.
So here it is; Tribute to the King of Enugu.

Wonderful!!!!
I love you Dailyleftover.
I dind't know Mr Onyeabor, what a discovery...

thank you so much. it's really hard to find music by william onyeabor but every time I find a new song I fall in love with it. It's a crime that none of his albums have been reissued.

that's grat. i was seraching tracks from this author. is it possible to have all his songs?

this mix is incredible!..my girlfriend and i have been jamming it all summer..we also have a tape label that's puts out mixtapes..would love to put out this Onyeabor mix in a small run..please let me know if you are interested..

Please repost this my friend. I've been searching for more music by this man to no avail.

dailyleftover
let me know if links died-out and i will re-up them for your personal pleasure ~ enjoy! USE ARCHIVE DROPDOWN FOR SEARCH GOLD ⏎